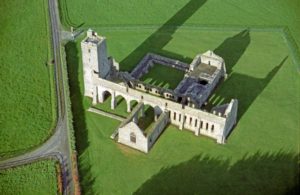 to the east of the village. The Friary was founded about 1253 by the Anglo Norman Fitzmaurice family and it has had a chequered history.  It was originally built as a Franciscan foundation but in the 16th century it was occupied by English soldiers and later by Protestant bishops.

The layout of the building follows the standard layout of most Franciscan friaries comprising a large church for both friars and the local population with a cloister and residential offices for the friars to the north of this church.  A large portion of the structure still remains including one side of the cloister walk.

A residential tower was added to the west end of the church in the 15th century.  It contains five floors each with a single room, some with window seats and garderobes (toilets).  Unfortunately the tower is not accessible to visitors.

In the 17th century the Friary became absorbed into the estate of the Crosbie family, the local landlords in the Ardfert area, and became an ornament in the grounds of “the big house”.

Ardfert Friary is an open site accessible to visitors year round.  Access is on foot from a public car park, a walk of about 5 minutes.