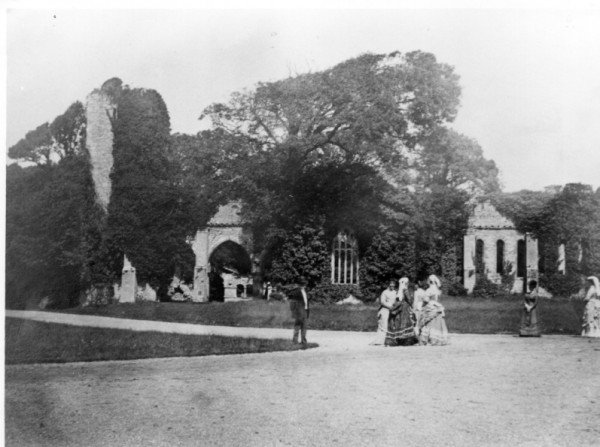 The Crosbie family were granted land in the Ardfert area by Elizabeth I in the late 16th century.  After the Desmond Rebellion of the 1580s the ownership of huge swathes of land in Munster was transferred to supporters of the English crown.  Amongst those who gained land was an Irishman, John Crosbie, who became the second Protestant Bishop of Kerry in 1600.
John had five sons and one, David, settled at Ardfert.  David built the first Crosbie mansion house in Ardfert in the 1630s on a site near the Franciscan friary.  This first house was burnt during the 1641 uprising, suffering the same fate as the Cathedral. 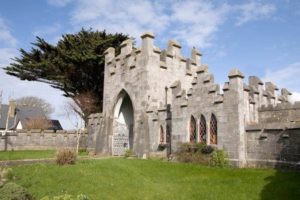 Over the generations the Crosbies became influential in local and national politics, various sons served as MPs, Privy Councillors and Governors of Kerry.  William Crosbie was appointed Viscount Crosbie in 1771 and in 1776 became Earl of Glandore.
The Glandore Gate in the centre of the village preserves this title.  This imposing entrance constructed in the mid-19th century was once one of the entrances to the Crosbie mansion.  It was relocated to its present position in the 1880s and is now a private dwelling.
The Crosbies were the main landlords in the area, and when William Talbot Crosbie died in 1899 he owned nearly 10,000 acres.  In the middle of the nineteenth century he began to redesign his estate in Ardfert.  The subsequent demolition of dozens of houses and the eviction of tenants led William to become known locally as Billy the Leveller.
William’s son Lindsey was a more benevolent landlord and one of his contributions to the village is still functioning.  In 1901 Lindsey had the fountain in the centre of the village constructed as a memorial to his brother; it served as the public water supply to the village for nearly 70 years. 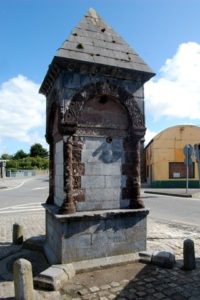 The Crosbie family left the Ardfert area in the early 1920s and on August 3rd 1922 the IRA ordered that the “big house”, situated behind the Friary, should be burnt to prevent its use by Free State troops.  This photograph shows the house before its demise.