Roger Casement: On the morning of Good Friday 1916, an ill fated attempt to 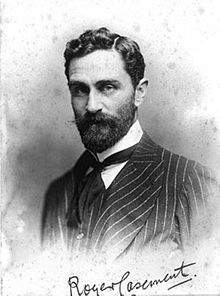 rendezvous with “The Aud” carrying a shipment of 10,000 rifles and  ammunition for the  easter rising.

Roger Casement with two members of his Irish Brigade, Captain Monteith and Seargent Beverly put a shore at Banna Strand from the German U-Boat, U19.

He was hanged at Pentonville Prison, in London on August 3, 1916. In 1965 his body was brought back to Ireland and buried with military honours in Glasnevin Cemetery as an Irish patriot, this despite figures such as WB Yeats and Arthur Conan Doyle lobbing for his reprieve. But it was not to be.